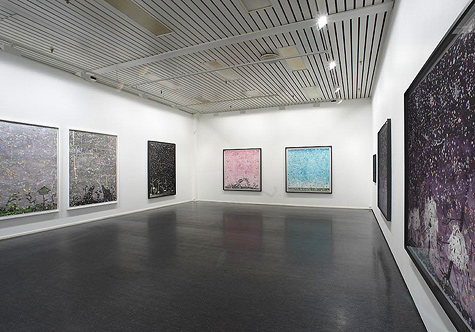 The path followed by Bo Haglund to become a freelance artist holding exhibitions of his works in galleries has been an unconventional one and is therefore interesting. He has studied set design and worked for a long while as a stage and costume designer, illustrator and graphic designer, in addition to being an industrial textile and product designer. And above all he has published several books of comic strips. This background no doubt provided him with completely different kinds of skills and points of departure for engaging in art than most of those who have followed more conventional routes. It has left its mark on his art.

Bo Haglund stepped into the field of art as an artist, like many others who previously kept strictly to their own domains. Today, also illustrators, graffiti painters and makers of digital art introduce elements of visual art into their work and hold exhibitions in galleries, venues reserved for the display of art. They have crossed boundaries, and genres have become mixed. The fact that representatives of visual popular culture approach visual art is no doubt as fruitful as the ways in which visual artists have approached popular culture.

It was through drawing comic strips that Bo Haglund also discovered his own path in art. Instead of the narrative continuity of the film-like frames he wanted to move on, as it were, to drawing a single frame, to underscore the point that even a single image has a story to tell. The narrative was condensed. At the same time that single image became visual art in its own right. Now, comic-strip illustration was only indicated by its features of style in places in his work and through the occasional appearance of characters from his comic strips.

The first thing one notices in Bo Haglund’s work is his stylistically distinct and personal mark. Particularly impressive are the numerous accurately drawn details of the works with which he creates impressive surfaces with the appearance of having been created with ease, while in reality they call for extremely painstaking and time-consuming work. For Bo Haglund, however, this is the most natural way to work. He finds drawing to be a quick and flexible way to reflect life and the surrounding world. Drawing also has a calming effect; it is a meditative process though often testing boundaries in different ways. In fact, he says that he draws his works like in Plato’s cave, knowing that outside there is another level of reality which he wants to and must attain, even though it would be easier and more enticing to remain in the present reality…

For Bo Haglund, artistic creativity is thus a martial art. But nothing feels prohibitively difficult if it is interesting if there is a desire to learn something new, if it is challenging and and there is some motivation to do it – a goal to achieve. He therefore has the energy to draw into his works of explosions an immense number of tiny fragments flying out of the centre of the blast, or endless, moving or frozen shapes of indefinite character seen from all possible angles.

Bo Haglund’s work also entails precision. There first a detailed plan, upon which he constructs the actual drawing, things taking place in space. The systematic and random creation of the image are in carefully considered dialogue. Even a seemingly chaotic entity will remain intact in a controlled fashion. All the pieces are always in their own natural places with regard to composition. The artist has the skill of aiming.

A fighting spirit and hitting the mark are characteristics of cartoonists, and thus also evident in Bo Haglund’s large drawings. His background in stage design is often evident in the silhouette-like character of the works. Their elements are like items of scenery on a stage, as in his most recent works. The artist’s work in designing fabric patterns, in turn, can be seen in his depictions of mountains consisting of a quiltwork of all kinds of patterns. All the other figurative elements such as trees, plants, earth, air and water seem to consist of something of which they do not consist in nature. It is as if they were coded in some way. And everything coded into something will form an overall image – or actually a mental image – of reality – or unreality. All this gives the viewer’s thoughts sufficient leeway and places the imaginary world of art before him.

These are good building materials, but what have they been made into. What do the artist’s works tell? What does he wish to say with them?

Haglund held his first art exhibition in 2001. At the time, the exhibition venue was dominated by his autobiographical piece ’Wallpaper’ (2001). In this work, Haglund aptly depicted the environment in which he grew up as a spiralling, fragmentary skein in his mind, including the school that he attended and a fight in the schoolyard on his first day there. Bo Haglund comes from a farming family and he enjoyed life in the countryside, but nonetheless wanted to leave as soon as possible once he had grown up – to cross the bridge and take the motorway into the city.

This exhibition also featured for the first time the comic-strip character Stubbhuvu (Stumphead)‎ invented by Haglund. This marked the beginning of the Stubbhuvu project. As a comic-strip artist, Haglund had naturally created a comic-strip character in his art to express the experiences of being human in the world. Despite its comic appearance, the character was tragic. It was always in a strong emotionally laden state of mind, beset by heavy moods of despair and grief. The character roamed in the forest and wondered with confusion at the reflection of his face in a pond; his feet left the imprint of a skull in the moss with every step, at every moment when time marched on. A storm raged, waters foamed, the wind uprooted trees. The physical nature of the landscape turned into a mental landscape.

Bo Haglund has said that he wants to express through his works how man and the whole world are in a state of chaos. He continued this depiction in the ’Turbulent Landscapes’ series of works with still images of explosions, and later with the ’Big Heads’ series, in which heads are like a reconstruction of the self, a depiction of the experience of being – a group of masses of lines thrown into the air and clustering here and there – like internal strongly emotional experiences – something chaotic behind a balanced exterior. In his exhibition ’Don’t worry, we will find a solution’, Haglund continued his ever-deepening foray into addressing the basic issues of life. Nature took the leading role, with images containing features such as a giant skull blending into the landscape.

The comic-strip character disappeared for a while, but it has returned in Haglund’s latest works. But it is now only like a film extra and the emphasis is on the landscape as a whole. The horizon is low and the sky rises above the tree-tops with a network of points of light creating a contrast against the background. This silhouette-like figure wanders in the landscape under a high sky. It is an integral part of the landscape, of nature and the cosmos – but in what is like a supporting role in a major play.

Space turns into a metaphor for emptiness, silence, imagination and the free play of thought. But it also becomes a symbol of a quest for a different reality, identity and feeling of community in criss-crossing texts borrowed from the world of visual communication of the Internet. The evidence of this new inter-human communication passes among constellations and planets – the nicks and pseudonyms of chat and discussion forums, net communities and game pages – as also information on what they happen to be doing, how they are feeling and so on. Cosmic and electronic space are intermingled.

In other works the sky is devoid of texts: only the stars shine in the heavens and the planets follow their orbits. Perhaps something invisible is made visible in the sky – something that is there, yet unseen. Standing on the plain is a monumental roller-coaster like a stage prop.